Arterial Network at the 53rd NGO Forum in Banjul, The Gambia 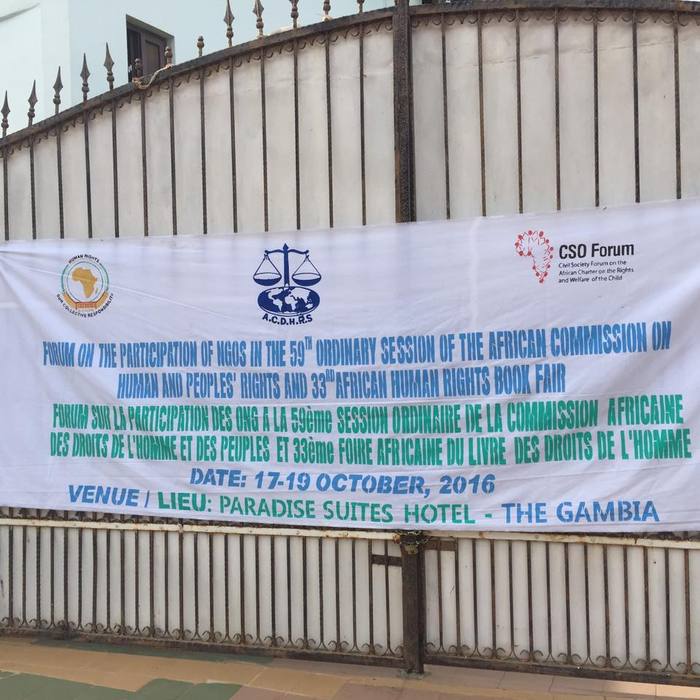 "The law is the weapon of resistance," said Mabassa Fall, member of the administrative board of the ACHRS to open the 53rd NGO Forum of the African Commission on Human and Peoples' Rights that was held in Banjul, the Gambia, from the 17th to the 19th of October 2016.

Arterial Network attended the forum for the first time to focus on the role of artists in democracy, but to also highlight the vulnerability of members of this group who are often marginalised by human rights organisations. Taking artists into account as Defenders of Human Rights was one of the recommendations of the Commission on Human and Peoples' Rights during group work.

Legal Framework and Strengthening Solidarity
The NGO Forum, that is held twice a year, brings together civil society and Human Rights organization to discuss the various challenges and implementation of strategies, to improve their work in the field. Certain issues were raised numerous times with some participants. They share their frustration with the lack of solidarity across the continent, but also the omnipresence of international organisations in place which don’t support local and community associations enough. This omnipresence can be restrictive, with international organisations imposing their views and agenda over the needs of those working on the grassroots.

The roles of the State and civil society were at the heart of the forum debate - in terms of mobility, Freedom of Expression, the Right of Association etc. Public opinion also has a large share in this battle. Often playing the role of main accuser and executioner, it is important to raise public awareness of these issues as mentioned by one of the panelists: "Public opinion is changing, it is never really constant. It depends on the advocacy that is put in place."

Partners for Legal Support
Finally, this forum was also an important opportunity for Arterial Network (through its Artwatch Africa project) to finalise a partnership agreement with the Institute for Human Rights and Development in Africa to improve the system of protection and defense of artists on the continent, including their right to freedom of creative expression.